Turkey amongst conservatism and growth 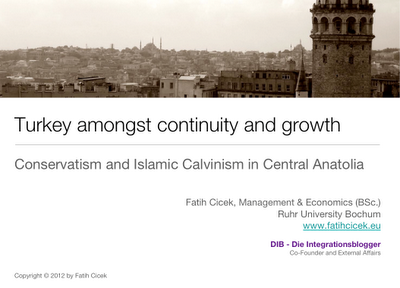 Yesterday I gave a short lecture at the university about the economic boom observed in two Central Anatolian cities, Kayseri and Hacilar, popular for their conservative and religious society. Trying to give a brief look over the political philosophy of the central Anatolian people, we came to the conclusion that a transformation of traditional values and virtues towards hard work, study, entrepreneurship and individual success resulted in an economic miracle: An industrial revolution turned a number of Anatolian trading centers into major manufacturing centers and players in the global economy. Among European politicians, who are sceptical of the turkish membership of the European Union, it is common to hear that Turkey has two `souls´, one of which is Western. The modern, westernized and cosmopolitan outlook of Istanbul on one side, and the coastal resorts with the vast turkish interior being impoverished and distinctly non-european in its values on the other side, are being contrasted.

Central Anatolia remains a religious and socially conservative society. Yet it has evolved a particular form of conservatism which is highly conducive to its new-founded economic success. Economic success and social development have created a social class in which tradition and modernity coexist comfortably.

Based on Protestant Work ethics (PWE) of Max Weber, to which the boom was attributed to, I tried to analyze the similarities between the hardworking `Protestants´ and the strongly religious inhabitants of Kayseri.
According to Keat (1991) and Carr (2000), creating the enterprise culture has two dimensions.

First it requires institutional and structural changes, such as on regulations, privatization, encouraging private business sector etc.  But these are not sufficient. Creating enterprise culture also requires moral foundations. This is about a long-term struggle to modify people`s way of thinking and transform their souls. In short: Religion, philosophy or culture may be argued to be a source of creating particular type of individuals in terms of economic activities and enterprise culture.
Said Nursi (1876-1960), an Islamic scholar and founder of the largest and strongest text-based Islamic movement in Turkey, urged Muslims to study and employ modern Western science and technology. He reinterpreted the virtues of Islamic entrepreneurship, the fusion of business and culture. Therefore it is possible to ask the question, if he could be seen as the "Turkish Weber". He also maintained that “since understanding Islam is dependent on time, space, and circumstance, competing paradigms must not be silenced.”
The movement’s members in Turkey are estimated at between 10 and 15 million. 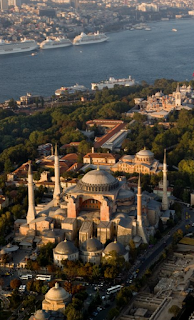 This new life-ethic, based on self-help, entrepreneurship, a sense of local belonging and an openness towards innovation mobilized the businessmen to establish social enterprises. The Hacilar Mutual Aid Association, TUSKON, MUSIAD, TUSIAD or ISHAD are just a few of these, promoting education through providing scholarships, building health clinics, sports centers, local police stations, arranging business trips etc. Considering these activities as a social responsibility, entrepreneurs have also won the courage to open own for-profit companies. The cable company HES, the furniture seller Istikbal, comprising 22 companies and an export network spanning 70 countries or the Orta Anadolu, a denim producing giant, making new investments totalling US$20 million and producing one percent of the world`s denim output, are also just a few examples.
In this respect, we can claim that religious businessmen in Turkey have started to work in a more rational way which requires full adaptation to free market and the capitalist system.
There are a few barriers for more economic success: Labor shortage, too few educated women to work in companies and deficient economic cooperation with the Middle East and Central Asia. Bridging those will lead to more success.

For those, who want to have the presentation, please contact me :) I could not upload it with Blogspot, damn technology :)